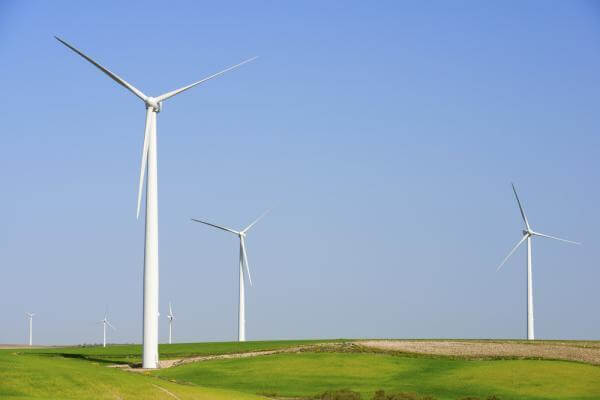 Stanford announces an innovative new approach to meeting its energy needs that will make it one of the world’s most energy-efficient universities. The comprehensive new system incorporates solar power for electricity, combined with heat recovery, to allow the university to exceed the aggressive greenhouse gas emissions reduction goals of California’s landmark AB 32 Global Warming Solutions Act. It eliminates 150,000 tons of carbon dioxide annually, the equivalent of removing 32,000 cars from the road.

Stanford University has converted to a state-of-the-art energy system that relies on renewable electricity and provides a new transformational energy supply model for large organizations, utilities and governments.

The university today announced a new agreement to provide the majority of its campus electricity from renewable sources within California. A Stanford Solar Generating Station, to be designed and built by SunPower, is expected to provide half of all campus electricity. Combined with planned solar power from installations on campus rooftops and the purchase of further renewable power from the grid, renewable energy will supply 65 percent of all campus electricity. The renewable energy is joined by a first-of-its-kind campus heat recovery system, which began operating March 24 to heat and cool campus buildings.

The combined new system – Stanford Energy System Innovations (SESI) – makes Stanford one of the most energy-efficient research universities in the world. It far exceeds the aggressive goals of California’s AB 32 Global Warming Solutions Act, which seeks to reduce greenhouse gas emissions to 1990 levels by 2020.

In addition to the deep reduction in reliance on fossil fuels, SESI cuts the university’s greenhouse gas emissions by 68 percent, which represents 150,000 tons of CO2 annually or the amount produced by 32,000 cars. It will save Stanford $420 million over 35 years (as compared to a cogeneration option) and will reduce total campus water use by about 15 percent.

“SESI achieves a stunning and unprecedented reduction in Stanford’s carbon footprint and water usage,” said Stanford President John Hennessy. “We believe this system can be a model for others equally concerned about reducing greenhouse gas emissions and willing to make an investment in the future. SESI is a transformational energy system for the 21st century, and we look forward to sharing the technology with others.”

Stanford has entered into an agreement with SunPower, a leading global provider of solar technology solutions, to build a 68-megawatt peak solar plant on approximately 300 acres in California. The solar farm, which will be called the Stanford Solar Generating Station, will be comprised of more than 150,000 high efficiency SunPower solar panels.

Stanford Solar is expected to come online in late 2016. SunPower has been selected by Stanford to install about 5 megawatts of rooftop solar systems on campus. Together with the Stanford Solar plant, the solar systems will provide about 53 percent of Stanford’s total electricity use.

“Stanford’s bold initiative to integrate cost-effective, sustainable energy solutions to power its operations is unparalleled, and we applaud the university’s commitment,” said Tom Werner, SunPower CEO and president. “SunPower is very proud to work with Stanford in support of the program. Thirty years ago, our company was founded by Dr. Richard Swanson, who was a Stanford professor and alumnus. Dr. Swanson is a legend in the solar industry based on his work developing the highest efficiency solar cells on the market today and helping to grow SunPower from a Silicon Valley startup to a global leader in solar technology solutions.”

The remaining 47 percent of Stanford’s electricity will come from California grid power, resulting in another 12 percent of which is renewable. Because about one-fourth of California grid power is renewable (and that will increase to 33 percent by 2020 under state regulations), Stanford’s total power mix will provide at least 65 percent clean electricity to campus buildings.

Stanford will use the green electricity produced at both the Stanford solar plant and from installations on campus rooftops, along with the California energy grid, to power campus buildings and the new facility.

Also key to SESI is the new, on-campus Central Energy Facility (CEF) that relies on a heat-recovery process that is 70 percent more efficient than the cogeneration process Stanford had used since 1987. The CEF will meet more than 90 percent of campus heating demands by capturing almost two-thirds of the waste heat generated by the campus cooling system to produce hot water for the heating system. To make that exchange possible, Stanford has replaced 22 miles of underground pipes and retrofitted 155 buildings to convert the campus from a steam- to hot-water-based system.

The CEF, which also includes a high-voltage substation, is run by a patented “model-predictive-control” software system developed at Stanford that optimizes cost and energy efficiency. The software has the ability to predict hourly campus heating, cooling and grid electricity prices 10 days in advance and then determine when it is most economical to use electricity to operate plant heating and cooling equipment. It also will determine how much hot and cold water to store in the CEF’s water thermal storage tanks for later use.

Operating much like an autopilot on an aircraft, the system continuously monitors plant equipment, predicts campus energy loads and grid electricity prices, and steers the system to optimal efficiency. It also continuously reviews its own performance.

Stanford’s SESI combines the best of existing heating and cooling technologies of Europe and North America, merged together for the first time ever in the United States. This first-of-its-kind system, differentiated by the combination of technologies employed and the scale of their usage, is designed to meet the university’s energy needs through 2050.

SESI began supplying campus energy on March 24, simultaneously with the decommissioning of the 30-year-old, natural-gas cogeneration plant, which supplied virtually all of the university’s needs.

The obsolete cogeneration plant, which will be demolished after all useful parts are sold for reuse, was considered remarkably efficient for its time. It produced electricity and recovered and used waste heat from the combustion process for campus heating. But the system also discarded valuable waste heat generated by the campus cooling system. Capturing that discarded heat, which was vented into the atmosphere, is the cornerstone of what makes the new SESI system so efficient.

SESI is designed to take advantage of Northern California’s temperate climate, although the system is adaptable to nearly any environment. As with most modern large commercial facilities, university buildings are being cooled and heated at the same time throughout the year to supply different room-temperature requirements.

In other words, the cooling process can be seen as a collection of unwanted heat. Some modern facilities take advantage of this heat overlap on a stand-alone building basis. SESI, however, takes this approach to an entirely new scale, encompassing a 15-million-square-foot campus with a population of more than 30,000.

“By significantly reducing natural gas usage and electrifying the campus heating and cooling system, we enabled the university’s energy supply to be substantially transitioned from fossil fuels with volatile and unpredictable long-term prices to clean renewable electricity sources with affordable costs fixed for a very long time,” said Joseph Stagner, executive director of Sustainability and Energy Management at Stanford.

SESI evolved from a 2008 Energy and Climate Plan that involved the entire university community, including Stanford faculty members whose research focuses on the environment and sustainable energy. Stanford faculty provided substantial guidance and assistance in modeling the new process for energy efficiency, as well as long-term project economics and other key facets of the proposed new system. After this substantial assistance and peer review, university faculty endorsed the proposed new system.

The goals of the Energy and Climate Plan were to reduce Stanford’s carbon emissions, meet long-term energy needs in a sustainable way and create efficiency. Studies conducted as part of the process of creating the plan revealed that more than 80 percent of the university’s heating demands could be met with waste heat already being removed from buildings by the campus cooling system.

The Energy and Climate Plan resulted in a proposal to build SESI, which was approved by Stanford’s Board of Trustees in December 2011. Stanford received approval to begin construction on the CEF in September 2012 from Santa Clara County. Work began immediately, resulting in a complete transformation of the campus energy system in less than two and a half years.

Equally important to the cost savings and emissions reduction is SESI’s capacity to reduce campus water use. Water consumption at the CEF is substantially reduced because a majority of the waste heat from the chilled water loop is reused rather than discharged into the atmosphere.

California suffers from a prolonged drought. Since 2000, Stanford has already reduced by 21 percent its domestic water use through building retrofits and other conservation efforts. With the completion of SESI, Stanford’s water reduction will increase to 36 percent in just 15 years – a substantial savings that will likely help Stanford meet the new California water reduction mandates outlined by Gov. Jerry Brown.

Beyond SESI, Stanford’s ongoing Energy and Climate Action Plan also stresses higher-than-required energy standards for new buildings, major retrofitting of existing buildings and programs to teach students, faculty and staff how to cut back on their energy use. New buildings, for example, are constructed to be 30 percent more energy efficient than required by code.

Many contributions made from key stakeholders made SESI possible. The County of Santa Clara’s General Use Permit (GUP), approved in 2000, foresaw a future where flexibility was needed to capture innovations that could not be imagined 15 years ago. This inherent flexibility within the GUP allowed Stanford to leverage these energy innovations and contribute to the health of our planet. The city of Palo Alto also recognized the significant benefits of this system and approved an amended agreement to allow construction of the Central Energy Facility in the optimal location. Without the contributions of Santa Clara County and Palo Alto, SESI would not exist today.