Home > A Leader Who Ensures You Keep on Smiling

A Leader Who Ensures You Keep on Smiling 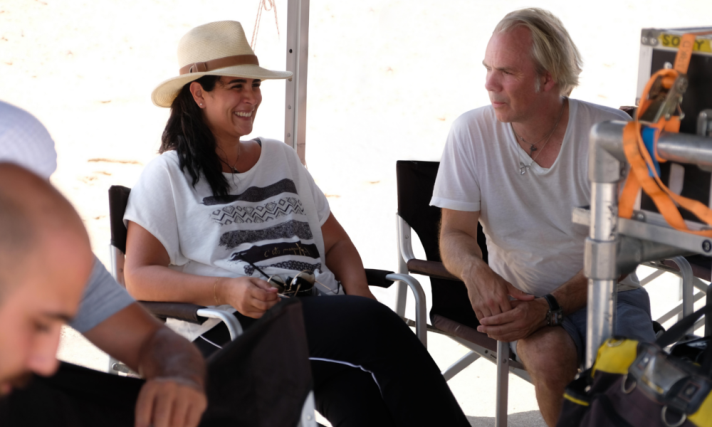 A Leader Who Ensures You Keep on Smiling

Dania Salha Quaglio started her career from the bottom of the production ladder, and worked her way up to become the Most Instrumental Woman in Media Production 2018 – Dubai. Currently working at Joy Films, which over time has become one of the leading Production houses in the Middle East, Dania provides us an insight into the success of the company, as well as her own accomplishments.

Dania Salha Quaglio gives us an insight into the success of Joy Films, as she features in Corporate Vision as the Most Instrumental Woman in Media Production 2018 – Dubai. Joy Films has become one of the leading Production houses in the Middle East, with connections to different clients from the local and international markets.

“Firstly, I feel really proud to have seen Joy Films evolving into what it has become today. Secondly, it has been a hub for many talented producers, directors and craftsmen, and it is always great to collaborate with the best craftsmen in the local and international markets. All the awards we have won and the acclaim we have received, is a tribute to their dedication as well.”

Discussing her role as executive producer, Dania has had to deal with a lot of people, meaning she must be aware of how personalities gel together to create the best result. Dania elaborates on what challenges she has faced since taking the position.

“As an executive producer, you deal with a lot of people and you need to be aware of how personalities gel together for the favour of our work. One of the main challenges was to find the right people to create a team that cares, and keeps the standards of our work at a very high level. It is crucial to find the right people you can delegate to because in my case, I sometimes find myself having to be in two different film sets in the same time.”

When undertaking a new project, Dania is keen to emphasise how important long-term relationships with clients are to the firm. Being honest with clients and letting them know exactly what is going on is something the team strongly believe in.

“Importantly, when approaching a new project, I always stress on being honest with clients. As I have mentioned before, transparency is key as it allows a way for trust. In this industry, clients and production houses spend most of their days corresponding, so it is important to have a good communication level and build that from a very early stage. As much as the client is demanding on us, I also feel I have to be demanding for them to ensure that they are not side-tracked away from the best product possible.”

Providing us with an overview of the industry in the Middle East currently, Dania mentions that the region is a wonderful location to film in, and is quickly emerging as the place to be in regard to filming.

“The Middle East in general is a great location to film in. As you are aware, many big films were shot in the Middle East throughout history whether international or local films. This region has become a major hub for filmmaking and with the emerging talent, great locations, professional crews and up to date equipment and approaches – there is no reason for great work not to come out of this region.”

In her time as executive producer, Dania has been able to develop her leadership skills, and she alludes to her leadership style, describing how she works hard to get the best out of her clients.

“Leadership is something that is earned and not given. For me personally, there are years of hard work and dedication which has gone into my craft. Leading by example is what gained me my team’s trust to keep improving, which in return helps me to carry out my responsibilities as an executive producer.

“My responsibilities vary from dealing with clients, suppliers and ensuring project consistency to managing my team. Not to mention, all the financial aspects which are connected to this job.

“As a leader, I believe I need to know how to do everything from photocopying to budgeting, in order to be able to explain clearly to employees everything from organisational goals to specific tasks.”

Allowing employees to have their say and giving them the freedom to be innovative and creative, serves the production company well. Dania explains how she pushes her clients to the limit, but the reward is justified as they excel and maximise their potential in their roles.

“Essentially, regarding my staff, I listen to them, to their thoughts, and I learn from them and they learn from me. However, I must admit, when I see things going in the wrong direction, things have to go my way in order to avoid jeopardising any project. I motivate them by pushing their limits, allowing them to do what they think they cannot do, as a result they will feel their improvement and achievements. Also, I delegate to each member of the team what they have to do on each project, and I give them my feedback since I feel responsible for their success and failure. Lastly, I take the blame when something does not go correctly.”

Despite forming a close bond with many of her staff, Dania still feels it important that a line is drawn between the two. She notes that the team are aware that she is the leader, and are keen to respect her authority as well as her responsibilities.

“As a leader, I find it quite challenging sometimes to keep the fine lines of friendship and leading my team intact. However, luckily my team has made it easier on me in that sense, where they are aware of their responsibilities towards me and each other on both the professional and personal front. I always look at the character of the person, interviewing them rather than the successes they have achieved – as good potential, leads to great things, in comparison to a finalised product which tends to come with less flexibility and adaptability.

“Furthermore, our industry is very demanding, with many people sacrificing and compromising on their personal lives for the sake of the team’s success. Since we are all on the same boat, I find it very important to appreciate this and be flexible with the team as much as possible, so they can create the best environment that suits their productivity and creativity. As a collective, we do not believe in strict time and place policies. As I have previously mentioned, establishing trust with my employees is key to us constantly evolving, however, the staff needs to be responsible enough to not abuse this trust. I know myself as a very demanding leader, pushing my team to the limits of their passion to see them grow, as well as constantly learning from their mistakes and individual journeys to empower the collective.”

Having gone into detail in regard to her leadership style, Dania further discusses the attributes she believes make her a wellrenowned, respected, and successful leader. She refers to the key values which she sticks to in order to keep up her success.

“Integrity, passion and a winning mentality are vital assets. I have to maintain the integrity of my craft and not think of the profit rather than the best result possible. This integrity leads to my honesty, I speak my mind when I am not happy with a product or an idea, many people are shocked by it, but then what’s the point of saying anything but the truth!”

Living by her ethos, Dania encourages others to never be afraid to fail, as she always wants others to grasp the next opportunity to learn and grow, but most importantly to remain humble. The future looks very exciting for Joy Films, and Dania predicts bright times ahead for Joy Films. She concludes by discussing the team’s vision, and what her own future holds in the times.

“Ultimately, the vision is to expand our platform to producing feature films and make our own self-produced films. As for me, I will be fetching for opportunities to direct TV commercials and fulfil the artist inside of me.”