Home > Leading the Way in Robotics

Leading the Way in Robotics 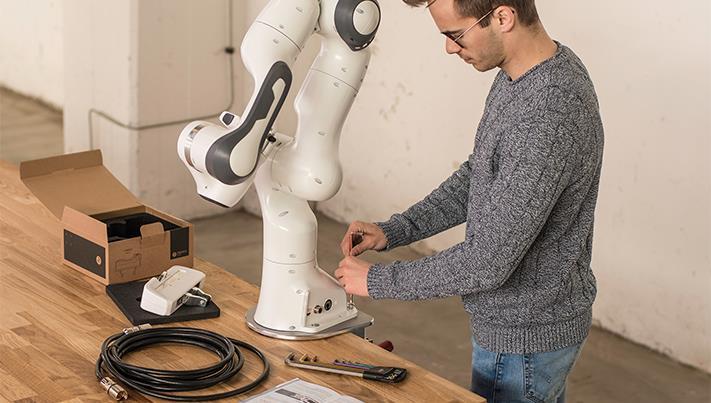 Franka Emika’s vision is to make robots a commodity by putting the human at the centre of the robot design. Recently, we profiled the firm to discover more about how the innovative team are changing the future, one step at a time.

Even today, robotics remains a technology that is accessible only to few. The reasons behind this that there are high costs, difficult programming and the separation of humans and robots by safety fences. Which leads to the question, how can this technology be made accessible to the general population?

The answer – Franka Emika. A young, high-tech company from Munich, who have a strong passion wanting to solve this problem.

For the talented team at Franka Emika, the ideal robot of the future for them is a tool which can be used by anybody, and one which supports humans in carrying out unpleasant or even dangerous tasks. Panda is the first system of an entirely new of tools, which incorporates a novel high-resolution, whole-body sense of touch to accomplish most delicate tasks accurately.

The system can be operated via Apps similar to a smartphone, but can also be taught new tasks within a few minutes,
any programming skills. At the same time, the system is sensitive to such an extent, that it can take over assembling, testing or inspection tasks.

The online platform, Franka World is the centre of the ecosystem, where the community will be able to exchange ideas. Alongside this, developers will get assigned to customers, which will allow them to introduce new solutions and applications on a more personal level.

In addition to this, the quality system was developed based on the globally leading German robot and is now being produced in series in Bavaria, Germany.

Looking ahead to what the future holds for the firm, the team at Franka Emika will continue to deliver their exceptional services. As for Simon Haddadin, he will continue to lead his team to great heights, especially following his recent success in Corporate Vision’s Corporate Excellence Awards 2018 in which he was righteously awarded the accolade Most Influential CEO of the Year 2018 Robotics and Technology.