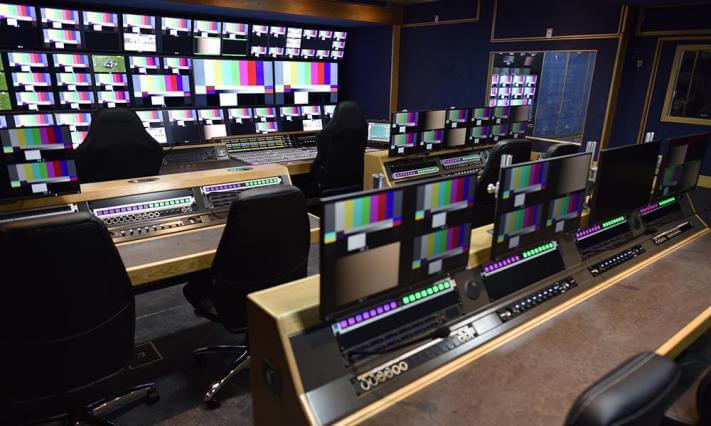 Arena Television is the name behind approaching 1,000 hours of mainstream television broadcast to British viewers every year. Arena is at the forefront of delivering Ultra High Definition, the new generation of programmes to the people of Britain.

We cover everything from Premier League football and Six Nations rugby, to Trooping the Colour and the Glastonbury music festival. No UK broadcasters own the resource to cover this type of event. Arena has a market share of approximately 23% and is the larger of two British owned companies that service the sector. We also hold all television helicopter news contracts.
Our work happens on-site at events and alongside the client, resulting in a close relationship that requires a seamless integration of the teams from each company. Ensuring this happens smoothly requires a strong and capable team, good communication and a shared desire to produce the best product possible.

For more than 25 years Arena has been providing outside broadcast (OB) facilities to all the major UK broadcasters, while remaining a privately owned British company. Throughout that time, we have been part of an industry at the forefront of technological development. The last two decades have seen as succession of new features appear in the marketplace; digital transmission, 16:9 high definition, Dolby 5.1 audio and now Ultra HD, HDR and Dolby Atmos audio.

Each feature enjoyed by the viewer, has a technological path back to the point that the video is captured. As part of this flow from source to consumer,

Arena Television researches and invests in the best solution to fulfil its function in the broadcasting chain. This can be made even more challenging by the fact that all our equipment must be portable, moving around the country to wherever an event is taking place.
Broadcasters outsource all multicamera production facilities to companies like Arena. In turn we supply the equipment and crews needed to televise events that take place outside of a TV studio. These typically range from sport and concerts through to ceremonies and natural history.

Arena’s fleet of mobile outside broadcast vehicles travel throughout the UK and beyond capturing images seen in homes all over the country, with our aerial filming team capturing news and general footage from the sky. Our aim has always been to provide the best technology to broadcasters, so that they in turn can deliver high quality programming to the people of Britain.

The challenge for Arena is to anticipate the requirements of our clients and translate those into a technological solution that works in a mobile environment. With each job having its own set of requirements, Arena maintains a flexible and responsive relationship with the client.
Introducing new technology into our process is not a new phenomenon however, Ultra HD has required such a dramatic change in the production process that its effects have been noticed
more widely than previous innovations.

In 2015, BT Sport pioneered the launch of Ultra High Definition (UHD) in the UK. At that time, there was an existing method of capturing and transmitting UHD however, Arena wanted to ensure that its own solution would meet the needs of the growing format for years to come. We began exploring emerging technology that would provide a powerful and futureproof solution. The result was a partnership with Grass Valley, an established broadcast equipment manufacturer, who had already begun to unveil a number of HD-IP solutions for its worldwide clients.

The new technology would move signals around using Internet Protocol, a well-known tool for homes and businesses but a complete change from the traditional technology used in broadcasting for decades. Broadcasting UHD involves moving vast quantities of data from the broadcasting location right through to the viewer. We believe IP will become the future standard for outside broadcast and be adopted in coming years throughout the industry.
In anticipation of UHD, development of our new outside broadcast vehicle “OBX” began in 2014. OBX would be the first of three Ultra HD trucks, built in succession to provide cutting edge technology to the UK’s outside broadcast market. It was agreed the project would ride the wave of the new technology coming to market from Grass Valley. This involved replacing the technology used by the television industry from camera all the way to the very televisions and mobile devices used to watch the content.

Grass Valley’s proof of concept testing utilised technology from Cisco, the world leader in IP based switching and routing technology. Grass Valley and Cisco announced a global strategic alliance to offer customers integrated broadcast solutions. Arena felt that Cisco was the natural choice for the IP switch, given Cisco’s market leading position and understanding of delivering mission-critical infrastructure in dynamic environments like an OB truck.

This emerging UHD technology is a powerful solution that is now providing television four times the resolution of existing HD. The beauty of Arena’s design is that it launches UHD, while still providing HD pictures in a process known as simulcasting. OBX is the first of three identical trucks built by Arena and was embraced by BT as a UHD / HD simulcast solution.

On Saturday the 10th September 2016, OBX was deployed at Anfield for BT’s Premier League coverage of Liverpool v Leicester. The match was successfully broadcast in UHD with both Dolby 5.1 and Dolby Atmos, and in HD with Dolby 5.1. The combined OB, which included an on-site studio show, used 28 cameras of which the cornerstone was the new Grass Valley LDX-86N.

Arena’s second UHD truck “OBY” began work on Sky’s coverage of Rugby Union in October 2016, and this contract includes England international matches at Twickenham. Arena considers that OBX and OBY are by far the world’s most advanced OB trucks, and is delighted to be able to showcase their capability on the Premier League for BT Sport and Rugby Union for Sky. The high-profile nature of these broadcasts illustrates how vital our technological innovation has been in delivering the television of the future to the people of Britain.
Arena also holds contracts with the BBC and ITV, both of whom will benefit from the introduction of our third new UHD truck “OBZ”.

Key Facts Box: A British owned and run business One of four key players in the market Produce content for all UK Broadcasters A fleet of over 25 outside broadcast vehicles Home of the BBC News and Sky News helicopters

UHD: four times the resolution of HD and a higher frame rate

HDR: a brighter picture with more detail in the bright and dark areas

IP: a future-proof and flexible internet protocol for moving data

Being selected as 2017’s Most Innovative Tech Firm by Corporate Vision is a privilege that belongs as much to our staff as it does the company. Without such a dedicated and enthusiastic team, Arena would not be in the strong position we find ourselves. Credit must be given to those whose professionalism and dedication make Arena’s success possible. Implementing new technology requires a drive and focus that our hard-working team has sustained throughout the rollout of our UHD solution. The recognition of this and other awards reflects the productivity of a team that we are all privileged to be a part.