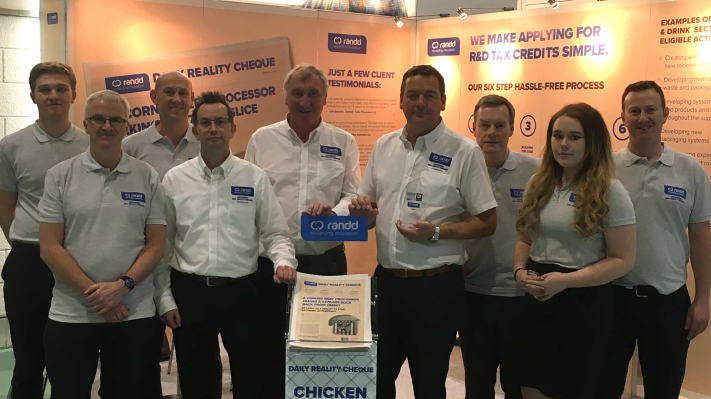 Since 2008, randd uk has delivered over £60 million worth of Reality Cheque cash injections to over 1,000 companies across a wide range of sectors through HMRC’s R&D Tax Credit incentive scheme. Called an R&D tax credit, it’s actually more of an award, and cash funds can be claimed by eligible companies whether they have made a profit or not on the identified R&D or innovation they’ve invested in. randd uk recently exhibited at a key trade show – Food Matters Live at the Excel London. Managing Director, Brendan Molloy spoke to us from the event about what the firm does and why it appears so many companies who could be in line for such cash awards (averaging over £55,000 per claim) appear to be missing out.

“This scheme isn’t widely known about or properly understood by SME’s within industry as a whole. Remarkably, government’s statistics show less than 10% of all eligible companies in the UK are actually claiming R&D tax credits. This is a huge missed opportunity because it provides an opportunity for companies to inject funds in their business and grow which is why we focused on increasing the number of companies in the UK working with us and overall.”

“randd uk is dedicated to firstly helping companies who invest in R&D and innovation aware they could recover a sizeable % of that money back, effectively a re-payment of corporation tax from the Inland Revenue.”

Brendan outlined how they work with clients to achieve the best possible results. “We work with lots of clients across wide ranging industry sectors, from engineering and electronics companies, software companies and many less obvious sectors, for example corned beef food processing and egg production.

“Firstly, we interview the principal players to understand what their development projects have been during the last two years. We record all conversations which we find is the best approach, look in detail and tease out what can be classed as development projects, in many cases highlight to them how they are involved in R&D/innovation by definition when very often they didn’t realise their activities made them eligible, which in essence has to include revenue expenditure on advancement with a risk and uncertainty of results of non-trivial scientific or technological investments.”

“The combination of our straightforward, straight talking and simple approach together with the highly experienced people that work for us is what sets randd uk apart. We only employ people with good and typically senior executive experience in industry, not accountants applying a box checking approach. That breadth and depth of business allows randd uk not just to identify what potential claimants didn’t themselves recognise as eligible claims, but other companies operating in this sector.”

We also have a very good relationship with the Inland Revenue so we fully understand what the scheme is trying to achieve and support. That’s why we’re proud we typically get 100% satisfaction from our clients, and equally as important, have never made a claim and not got a result.”

“We make the process as simple and as quick as possible, usually only needing one key meeting plus the completion of a financial template. That’s all the claimant needs to do and we do everything else, including the submission of the claim to HMRC.”

randd uk understand the breadth of development work by British companies. “It’s a staggering level of investment” says Brendan, “the depth of investment even by small companies you wouldn’t expect to be doing development is outstanding, which makes it all the more surprising so few claim what’s available.”

With impressive figures of a 100% success rate from the more than 1,000 claims to date and over £60million worth of R&D tax credits awarded, randd uk’s efficient and friendly service is looking to double the size of the business over the next five years, building on their substantial service to the industry, attracting both new clients and new employees to deal with that increased awareness and demand.

Those figures and randd uk’s commitment to widening the reach and take up of R&D tax credits are some of the key reasons they were delighted to be awarded the European Business Award – Finest in R&D Consultancy Services (UK).

All of this can only be good news for companies thinking about innovation investment against the uncertainty of Brexit one side of the atlantic and an ‘Apprentice’ politician running the world’s largest economy on the other.

As randd uk’s provocative stand at the recent trade show boldy made clear, only 6-9 months ago, both those events were about ‘as likely as’ Leicester City winning the Premier League.

So if you’re reading this thinking ‘that’s great but I bet my company isn’t eligible’ check it out. It could be a Reality Cheque you’d be only to happy to be on the receiving end of.