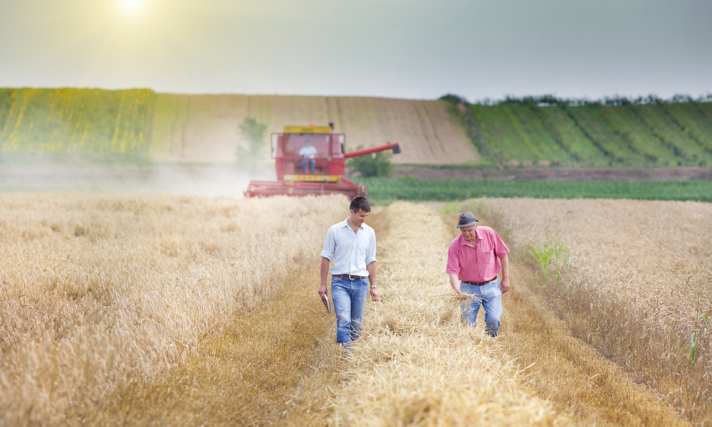 Digital disruption has affected many different industries from finance through to manufacturing. In this process there has been some winners and some losers, as traditional companies face increased competition from new players and more agile start ups find more efficient ways to deliver new products and services. One industry that has been slow to adapt to technological change is agriculture, where machinery has been the most advanced piece of technology used in daily business and farmers’ work remains manual and tied to the seasons. However, digitisation and the advent of AI and the internet of things is set to create fundamental change in this most ancient of industries.

One of the biggest ways that farmers have evolved their working practices is through what has been coined “precision farming”. Previously farmers would use machinery to apply seeds and fertiliser and spray large sections of the field with pesticides, quite often over spraying the same section of land twice as the machinery made its way up and down the fields. This process has several downsides: the waste of fertiliser and pesticides leading to increased costs for the farmer, the pollution caused to the environment through excess chemicals making their way into the water table and the wasted time spent duplicating effort across the crop that could be more efficiently spent tending to other crops or managing other important tasks.

Satellite GPS technology has primarily enabled precision farming – allowing farmers to determine the precise location of the tractor in the field so that it can more efficiently be directed and avoid going over the same area twice. This process can also be completely automated, allowing tractors to follow a predefined route using data from the satellite rather than being operated by a human driver, or be guided by sensors located along the perimeter of the field. Drones are also now being used to distribute chemicals to the field more efficiently which can either follow GPS co-ordinates or be remote controlled by a human operator nearby.

One of the reasons why farming has been slow to become digitalised is the sheer complexity of the processes involved. There are a wide range of crops grown by farmers, different processes that must be carried out at different stages in the crops’ lifecycles and a variety of different climates in which crops are grown around the world. Whereas managing crops used to be a matter of experience, constant attention to signs of health and disease and just sheer luck, now sensor technology is providing a wealth of data on the conditions in the field so that farmers can enforce key decisions at the optimum time. For example, sensors can now tell you the nutrient levels of the soil across different chemicals such as ammonia and phosphate so that you avoid under fertilising or fertilising the soil and only apply nutrients at precisely the right time.

Other information beneficial to farmers include soil acidity and water retention, creating a detailed picture of the condition of the crop and saving time spent on the detailed measuring and monitoring that forms an ongoing part of a farmer’s responsibilities. The internet of things now means that sensors can be integrated with other machinery, such as the drones we discussed earlier. This means that if a specific section of a field requires more fertilizer, a drone could automatically apply the necessary nutrient to that specific area without having to apply to the whole field each time.

With this abundance of information being shared between devices and machinery, there is a growing role for software to analyse this data and facilitate the automation of manual processes. Some technology companies are now providing platforms for farmers to centrally manage multiple crops and technology from one single interface. Software can also deliver detailed information to a farmer’s mobile device or tablet as much as it can a computer, meaning they can have ongoing control and visibility over their crops while on the move. The problem which the industry is beginning to recognise is that there is no established process on what technology providers can do with this data being transferred across their networks. As such, data regulation such as the recently imposed General Data Protection Regulation is likely to be the standard which European agriculture software companies adhere to. This is also likely to be the standard which other countries follow in future, since Europe is much more advanced in this area than other countries like the United States of America.

While we have been talking about the opportunities digitisation provides to farmers, and rightly so, there will also inevitably be new opportunities for other businesses that previously could not target the agricultural market. In addition to analytics software, agricultural businesses will need more cloud delivered services to facilitate IT functions remotely which they cannot conduct on site, such as data hosting and storage, while the connectivity needs of farmers in remote areas will encourage further investment in telecommunications infrastructure and services from suppliers operating in this space. It will be interesting to see which new business opportunities evolve in this new sector that we cannot currently anticipate.

In conclusion, digitisation has significant potential to benefit farmers, technology suppliers and the end consumer through better, cheaper products and minimal environmental impact. Technology will also remove some of the barriers between agricultural businesses and service providers that currently deal in other industries, creating new business relationships. Agriculture may be one of the oldest industries in the world, but it is set for rapid change where we may well see the most exciting application of new technologies.