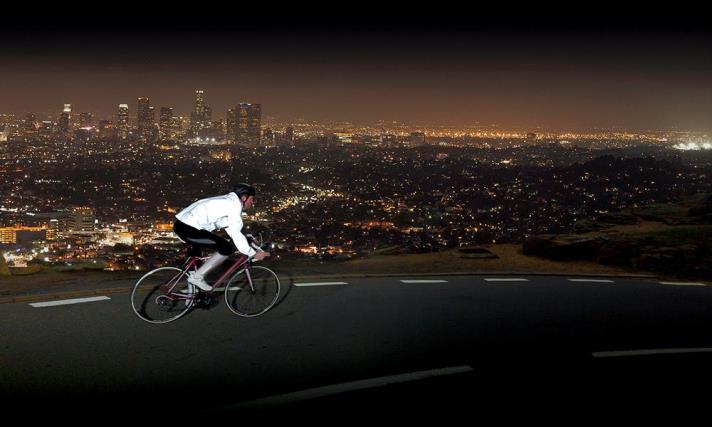 Proviz is an international sportswear brand specialising in enhanced visibility gear. Launched right in the middle of the worst economic crisis in a generation, the company now distributes its products to more than 40 countries. Founders and brothers Anthony and Rupert Langley-Smith share their experience and advice around building a brand during times of recession.

The best ideas are often born out of necessity, and that’s certainly true for international sportswear brand Proviz, created a decade ago by Jersey-born Anthony and Rupert Langly-Smith. Back in 2008, the brothers were both living in London and commuting to work by bike. Like so many others they did their best to make themselves visible but still had their fair share of near misses and knocks, particularly in the dark winter months.

“The products that were available at the time were high visibility, in the sense that they were fluorescent pink and yellow,” says Rupert. “Some jackets had a bit of reflectivity, but, frankly, as soon as darkness fell, you might as well have been wearing black.”

Both men had long harboured a dream of going into business together but had never quite hit upon the perfect idea. This, though, looked like a very real gap in the market. “We got to thinking ‘what if we could make the cyclist the source of light?’” says Anthony.

And so, with no design, manufacturing or retail experience to their name – both trained as marine geographers – the brothers decided to take a leap of faith and set up their own firm, creating and selling a small set of highly reflective products.

“We made quite a lot of mistakes in those early days,” says Rupert, who was tasked with figuring out the design and supply chain side of the business. “We didn’t know about simple things like labelling, tags. I remember trawling through all these sourcing sites to figure out how to get hold of good, reliable suppliers.”

The hard work soon paid off and their first piece of kit was the Triviz lighting device, which used electroluminescent lighting. Typically used in advertising billboards, a battery and some simple electronics are used to make phosphorus particles bang together and glow. The device went on to win a Red Dot Design award and just two years after deciding to go for it, Proviz had a small selection of products and was taking its first orders.

“We approached a few distributors with our tiny catalogue of four or five products,” remembers Anthony, “and, amazingly, one of the big ones said: ‘We don’t have a high-vis brand. We’d love you to get involved.’ Literally, that was the first order.”

But the real turning point was the development of its iconic REFLECT360 range. You’d know if you’ve seen someone wearing one of these jackets since they light the wearer up like a Christmas tree when car headlights hit them.

This is possible thanks to millions of tiny reflective beads that are embedded within the fabric. The beads can’t be seen by the naked eye but when a direct light, such as car headlight, hits them, they literally light up like a beacon.

“One Guy Fawkes night we took the family out and all we had was some of our early Nightrider jackets,” says Anthony. “They just had these really bright reflective strips and I remember being caught in headlights and cars clearly slowing down. I said to Rupert, ‘imagine what that would be like if the whole thing was reflective?’”

So, working with their suppliers, the pair designed and made a jacket just in time for a big trade fair and suddenly found themselves surrounded by press and retailers wanting to get a look. “We got our biggest ever order from a major retailer just off the back of one jacket on one mannequin,” says Anthony. “It was a real game-changing moment for us.”

Four years later, the REFLECT360 range continues to be one of the company’s most popular collections and has turned Proviz into champions of high visibility innovation. “Proviz is about visibility, and that’s what we focused on right from day one,” says Anthony.

That focus will get another welcome boost later in the year when Proviz launches its new-look branding, with the strapline ‘defy the darkness’. “We want people to see us as a specialist brand, to demonstrate that this is our territory,” says Anthony. “We think the new strapline is bold and distinctive and when people see it we want them to think ‘empowerment. We’ve tested it on a mix of external audiences and we’ve been thrilled by the response.”

The key, though, to any great brand is to keep moving forward and for Proviz that means innovation. And, 10 years on, it is still doing just that, with the launch of its new elite performance gear. “Traditional reflective materials are rigid, non-breathable and don’t typically lend themselves to comfortable high-performance clothing,” says Rupert. “So we’re particularly pleased with our growing elite ranges especially since we were told a decade ago this would never be possible.”

Don’t give up your job too soon:

When anyone ever asks us about setting up on their own we always say make sure you have a steady income – even if it’s just a part-time job – from somewhere else in the early days. You’ll want to put all your energy into your new endeavour, but it takes longer than you think to get revenue coming in and the last thing you need is to get six months down the line and have to pack it all in because you can’t pay the rent.

Specialise in what you do:

Really focusing on the high visibility aspect of our industry has been key to our success. We think very carefully about the types of products we want to sell and why.

Don’t rest on your laurels – we’ve seen some competitors who are still making the same stuff they were making 15 years ago. We want to be seen as the high visibility sportswear brand and every idea, concept and technical innovation is in service of that.

Be willing to take risks:

You’ve got to take punts. We discussed whether a fully reflective jacket would just be too much – wondered if it might be a bit ridiculous? But there was nothing else out there on the market and it’s ended up being the best thing we could have ever done. And don’t be afraid to make mistakes – it’s how you learn what works.

Research your market and suppliers:

This was something we found quite tricky begin with. For instance, we had no concept of minimum order quantities, so suppliers would say ‘yes, but the minimum is 500 units’ and we had no real budget at the start, or anywhere to put everything. The more research you can do the better. That goes for any regulations that your market might have, too.

1
We use cookies on our website to give you the most relevant experience by remembering your preferences and repeat visits. By clicking “Accept All”, you consent to the use of ALL the cookies. However, you may visit "Cookie Settings" to provide a controlled consent.
Cookie SettingsAccept All
Manage consent