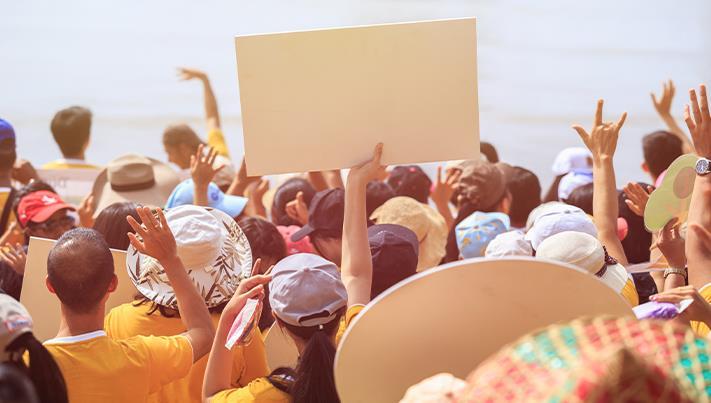 Recent political and economic events have seen a rise in protest action across the world, with Extinction Rebellion, animal rights activists, and LGBTQ equality being just some of the most well-known examples in the UK.

With social media giving movements a significant advantage, protest culture has captured the attention of celebrities and, as a result, global action has gained traction – protests are not only more frequent but also more successful than ever before.

Further, news of the High Court ruling that the Metropolitan Police force’s ban on Extinction Rebellion protests in London last month was unlawful indicates that protest movements are here to stay. Whilst the right to lawful protest is a right that should be preserved, if protest action impacts the day-to-day operations of businesses and livelihoods, the tolerance of senior businesses leaders and landowners to protest action will be very limited.

So, what can a business do if targeted for protest action on its land and buildings, and what steps can be taken to protect the business?

It all starts with Article 11 of the Human Rights Act 1998 which states that “everyone has the right to freedom of peaceful assembly and to freedom of association with others…” However, as shown in the recent case of Boyd v Ineos Upstream Ltd [2019] EWCA Civ 515, Article 11 does not include a right to trespass on private property and thereby override the rights of private landowners.

There have been a flurry of recent court decisions whereby landowners and businesses have taken formal action against protesters to regain possession of land/premises and obtained injunctions to prevent protestors from trespassing on their private land.

Whilst the court upheld some of the injunctions awarded, other injunctions were discharged on the basis that they were “too wide and too uncertain”. So, whilst companies can take necessary action where there are threatened acts of wrongdoing, including trespass, they must carefully define the acts they wish to protect themselves against, in order to obtain the correct relief.

This message is echoed in another recent case of Canada Goose v Persons Unknown [2019] EWHC 2459.  The business owner, Canada Goose, sought an interim injunction against animal welfare activists for harassment, trespass and nuisance caused outside its flagship Regent Street store. Here the High Court refused the company’s application and retracted the injunctions initially granted. Therefore, a useful set of learning points can be compiled for businesses from this case:

When pursuing an injunction, claimants must name any known defendants or at least define classes of “persons unknown” when individuals cannot be named, so wrongdoers can at least be identified by the court. In the Canada Goose case, the claimants failed to name specific protestors or sufficiently identify categories of persons as they became known to them.

It is understandable that in the heat of a protest, finer details can be overlooked. However, taking stock of events sooner, rather than later, can be critical further down the line. Businesses should document as much information as possible about the protestors gathered on their land including collating accurate descriptions of those involved, and taking or gathering photographs, CCTV or bodycam footage. Whilst being able to name protestors is not essential to taking successful legal action, the courts will only grant an injunction against identifiable categories of wrongdoers, therefore, gathering this information is key for success.

For land and business owners, having a clear and firm approach to trespassers is essential. Whilst trespass is a civil matter, sometimes this can lead to breaches of the peace and criminal offences may be committed. By notifying the police at the earliest opportunity and reporting the commencement of a sit-in protest to the business’ legal advisors, necessary and formal steps can be taken.

Protestors occupying private land must be made aware as soon as possible that they have no right to be there and that an injunction will be sought, should they refuse to vacate. Whilst there is no minimum time frame for this, legal action is usually taken within 48 hours after the protest starts. Acting fast is therefore very important. The Canada Goose case is a helpful reminder of this, highlighting that an injunction will only be awarded where there is a sufficiently real and imminent risk of wrongdoing – any delay in commencing court proceedings may therefore diminish this test.

The courts are taking a more cautious stance when granting an injunction and if an injunction is awarded, it must not only be clear and precise but have geographical and temporal limits.

These were the key messages from the Canada Goose case and the reasoning behind this is to enable those caught by the terms of the injunction to understand what they can and cannot do. Companies will therefore need to define what unlawful activities they need to restrain – for example, trespass or harassment – be able to identify the relevant group of persons and enforce this over a definable area and for a certain period of time.

The disruption to business operations, potential reputational and criminal damage, and the costs involved in re-taking possession, are just some of the repercussions that businesses face when a sit-in protest takes place on their land and buildings. So, what steps can they take to mitigate the damage and ensure that business continues as usual?

Depending on the nature of the protest, a health and safety assessment should be carried out by the appropriate person in the business, to explore ways of being able to continue ‘business as usual’ when a protest takes place. For example, business and landowners may choose to engage with demonstrators to request that they refrain from interfering with members of their workforce, their contractors or agents, or members of the public. Understandably, this will not always be possible and so providing staff with alternative access to a building or area should be considered. Encouraging staff to work from home can also help with safeguarding and assist with business continuation.

Failing that, the worst-case scenario is temporary closure of the business, which can have significant cost implications. Whilst businesses cannot claim losses from ‘persons unknown’, companies may be able to claim a sum for damages including any damage to property or land, and loss of profits if individuals can be identified.

As a business owner, it is necessary to be prepared and quickly respond to unexpected disruption. Businesses that keep in mind the learning points above will not only improve the resilience of their business but taking successful action will also project a reputation of strength across the market.