Home > WHAT TOXIC TARGET CAN TEACH US ABOUT GROWTH

WHAT TOXIC TARGET CAN TEACH US ABOUT GROWTH Stretching targets matter in business. They are a powerful force in creating and shaping a business’s culture. Goals are simultaneously symbolic – reflecting a leader’s confidence, unifying – aligning teams behind a common pursuit, empowering – allowing teams to jettison, where necessary, the accepted norms, and inspiring. Nick Pye explores how toxic targets can make or break a business.

In many corporations, the general trend in financial target setting has been the bigger the better. The challenge is that a target is a promise to shareholders, investors, employees and customers. The problem with a promise is that it needs to be kept, and the bigger the promise the harder it is to deliver. There comes a point when a bold stretching target becomes a toxic one.

Toxic targets are those which, in short, are so stretching that the only way to deliver on them is to cheat. Like Rosie Vivas, who famously won the Boston marathon in 1980 by taking the subway, the pressure to perform can lead to short cuts. These range from “cooking the books” as seen in recent high-profile accounting scandals from Tesco to Patisserie Valerie, to out and out fraud. The most topical example of this is the billion dollar Theranos scandal, a story so extraordinary that HBO are turning it into a mini-series.  In less than a decade after being set up in 2003, its valuation had peaked at $10bn and the business had attracted nearly £1bn in funding.

Fast forward another 5 years and the business has been shut down and Holmes and her team have been indicted for wire fraud and conspiracy.  It appears that, in the struggle to keep the momentum of growth and hit targets, they had falsified test results and misled investors and customers about what the tech could really do.  They story has become all the more extraordinary as the details of Holmes’ life have come to light.  She was at one stage worth around £4.5bn but expensed the rent of her Los Altos home, refused to fly commercial and travelled with a security team of up to 20.  She and Theranos’s COO are facing $2bn dollar fines and up to 20 years in prison.  As the saying goes – if it’s too good to be true, it probably is!

The pressure to deliver more and more growth is ever present for the teams we work with. A good year must be followed by a better one. The logic is that if a business is not growing it is declining. The absence of growth is decline, when growth stops, decay begins. Businesses are like sharks; if they stop moving forwards they die. In this way our obsession with growth is understandable – growth is a necessity and so the end justifies the means, whatever this entails.  This is where the toxicity begins.

We would argue that most companies have too narrow a focus and definition of growth and are too driven by singular financial targets – often accompanied by a generic mission/vision statement.

Take the example of an advertising agency with 20 employees, seeking to double their headcount and turnover in a 3 year period. They have a strong business, are well known in their industry and do good work. They actually grow to 50 people. So far so good, but there are two challenges this raises. The first is where now? Do they have to double again? How do they maintain momentum? They are a shark! The second is that, whilst the CEO/founder is running a bigger, fast growth business he is deeply unhappy. Profitability is down, overheads are up, and he is constantly chasing the revenue needed to pay for the new hires. This means he is accepting briefs he would rather not because he has no option but to feed the 50-headed beast. The growth has been toxic for him personally because it has reduced both his personal enjoyment and financial reward.

The challenge is that by defining growth targets solely as financial or about building scale (headcount, offices, distribution) we lose sight of why we are doing what we are doing. The CEO set up his ad agency to do amazing creative work but he has become trapped by his own misguided growth aspirations.

We have seen the same happen with clients who measure turnover in the billions not the millions. Whilst growth is important for individuals, teams and businesses, financial metrics can be “addictive”, often short term and by their nature, one-dimensional.

A key question is whether you are prepared to do what it will take to get to your target. Do you have the resources – financial as well as emotional? Are you prepared to take the risk? We see many corporates sitting in the land of “unmet opportunities -some estimates suggest over two-thirds of FTSE companies miss their stated targets.  This can negatively impact team morale as well as external investor and customer credibility.

High performance teams operate in the Stretch Zone – defined by more than just financial targets (below). 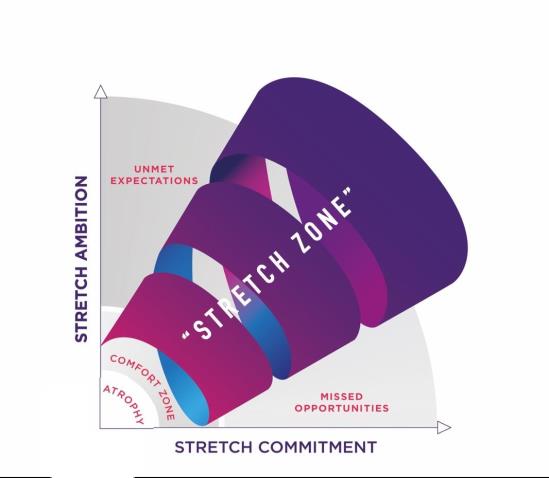 In our experience, what is paramount, is having a much clearer view of why you are trying to grow. There should be no growth for growth’s sake. When there is a deep motivation which drives the team there is a much greater chance of getting in the stretch zone and staying there. A set of common beliefs galvanizes and motivates. It is part of human nature to want to contribute to something beyond ourselves and to consider why it matters to us and the wider world.  Simon Sinek’s TED talk on “start with the ‘why’” has notched up over 2m hits with good reason! It is perhaps unsurprising that an individual’s happiness stops correlating to wealth and income once they earn over $75k pa. We need something other than numbers to chase.

Secondly, these teams that find themselves in the stretch zone seem to view growth in a broader way – it is part of their culture. Typically, they have a “growth mindset”. They see growth as learning and development, of ongoing improvement.  It is not a binary choice of hitting the target or not, of having been right or wrong. This is a key, but often underestimated, dimension of any performance culture.

Thirdly, they tend to have a longer-term view of growth. Winning sports teams and family owned businesses share in the language of “legacy”. This long-term view is something many listed businesses struggle with due to the focus on quarterly growth. The short-term focus means that opportunities get missed. It is interesting to note for example, that the 25 largest food and beverage companies in the USA accounted for only 3% of total category growth in that year, despite accounting for more than 45% of total market. Growth comes when there is a longer-term view.

Ultimately, targets and the growth they drive seem to turn toxic when they are financial, short term and the implications have not been worked through. Setting a target can be a powerful force for change – both good and bad, so be careful what you wish for! 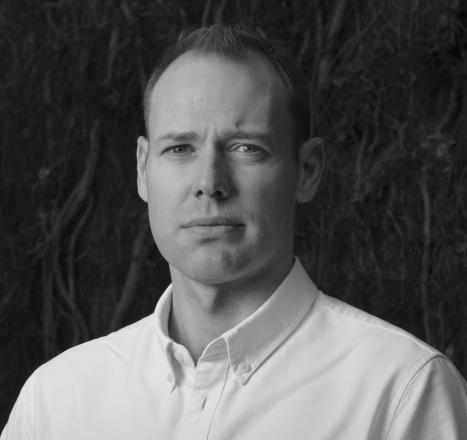 Nick Pye is co-founder of growth and innovation agency, Mangrove and co-author of Stretchonomics: The art and science of success

1
We use cookies on our website to give you the most relevant experience by remembering your preferences and repeat visits. By clicking “Accept All”, you consent to the use of ALL the cookies. However, you may visit "Cookie Settings" to provide a controlled consent.
Cookie SettingsAccept All
Manage consent